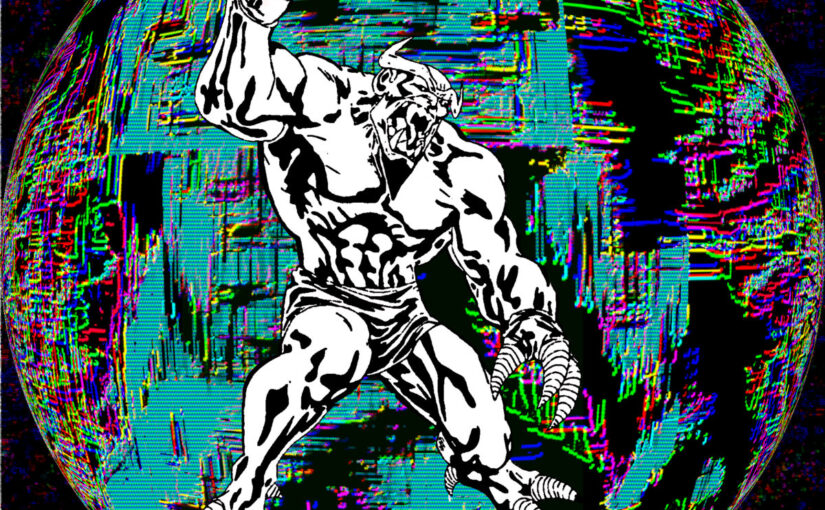 Hey everyone. We’ve been pretty quiet for some time now, and for the foreseeable future, it’s going to stay that way; for all intents and purposes we are on a more-or-less permanent hiatus. We want to thank everyone for the great times over the past few years and for all the support we’ve received. There’s no bad blood between us, it was just time for this chapter to end. Three of us (Julian, Kris, and Sage) are still working together on a new project though: Toxitolerant

This new band features Giselle Sanchez on Vocals, and the debut demo just dropped, so please go give it a listen. If the world ever gets back to some semblance of normality, you may even be able to hear it live. 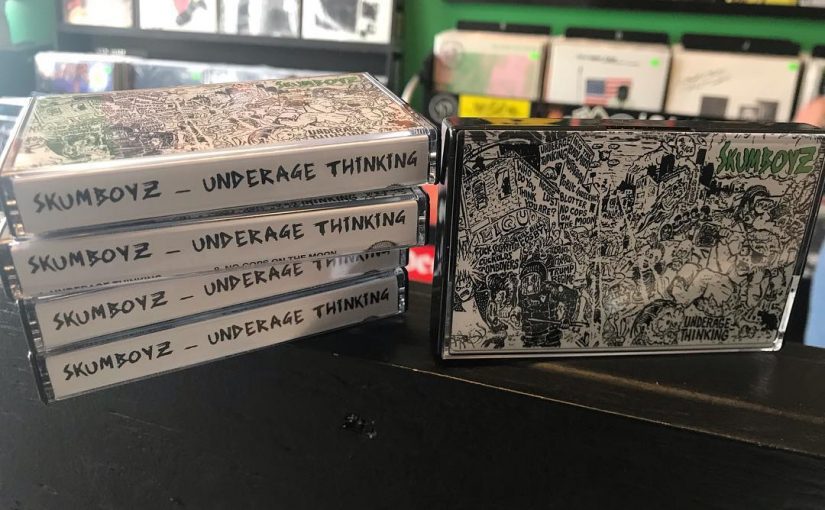 We want to give a huge shout out to Bobby from Vinyl Conflict who’s releasing the cassette version of our debut LP Underage Thinking on his label Vinyl Conflict Records! Be sure to pick up a copy at the store (or from his webstore). 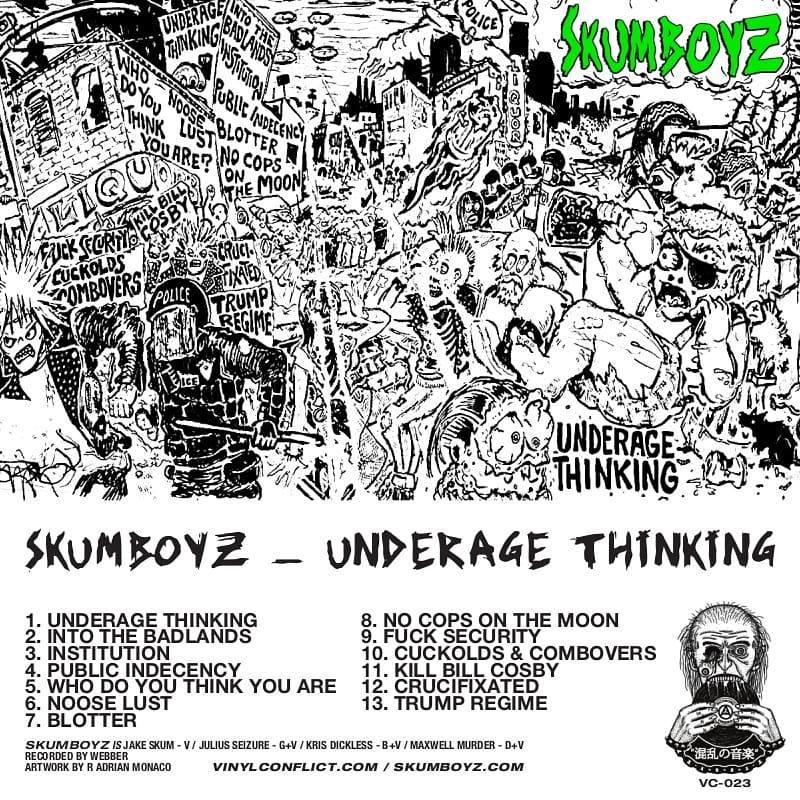 We also have a few CDs that we’ve done up ourselves. Don’t worry, they look alright. You’ll be able to find those at shows, or order them from our seldom-checked online merch store. Or you can just stream/download it from one of the many sources online. Please do that and save us from going to the post office. 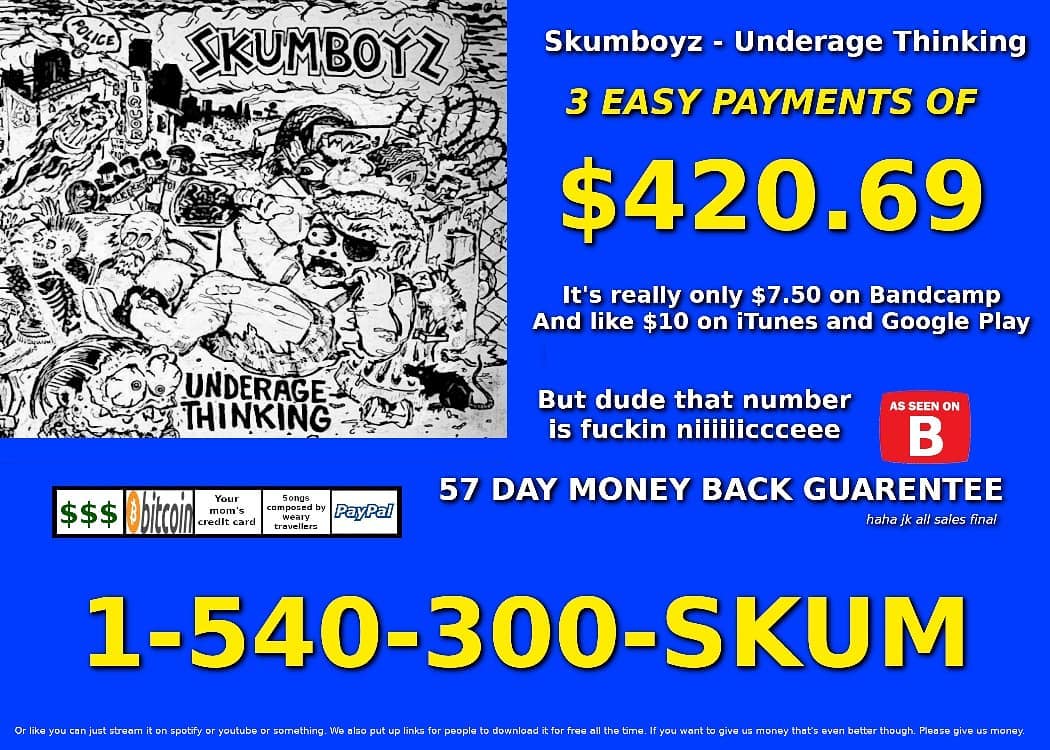 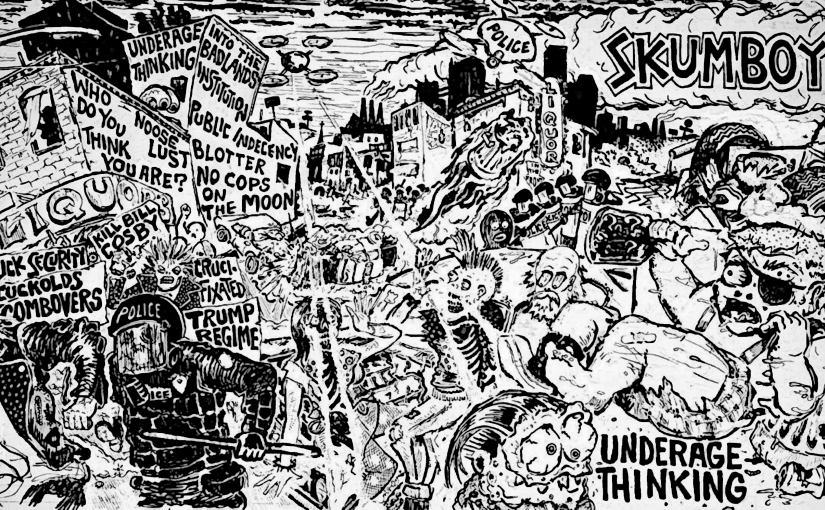 Richmond, VA (19 November 2018) — Are you guilty? It’s out, it’s finally out. After months of waiting, we are proud to present our debut LP, Underage Thinking. We want to thank everyone who helped make this album a possibility, especially Webber from Cremains, who did all the recording, mixing, and mastering. And who could forget R Adrian Monaco who drew our amazing artwork.

We previously released two singles (Who Do You Think You Are? and Blotter) to promote this album, as well as a music video for No Cops On The Moon. We’re currently working on another video for our song, Into The Badlands.

You can grab your own physical copy of the album for like $10 from our dangerously under-stocked online merch table, and eventually on the shelves of local low-brow record stores that would carry this sort of filth. Otherwise, you can buy the album digitally from Bandcamp and other major online retailers. Prices range from $7 (on Bandcamp) to whatever iTunes is charging these days.

Fredericksburg, VA (3 October 2018) — You gonna tell me? We would like to proudly announce release of our first single, Who Do You Think You Are?, from our upcoming LP: Underage Thinking. Another single is going to follow before we release the album in its entirety, so keep your ears peeled.

You’ll be able to buy the track on all major digital retailers shortly, but to get the alternate version of the song featured on the B-side as well, you’ll have to check out our Bandcamp or Soundcloud. We also want to give a special thanks to Ellen Lee for doing the amazing cover art for this release. Stay tuned.

Fredericksburg, VA (21 May 2018) — After a long wait it’s finally coming… soon. With the completion of recording as of yesterday, we would like to officially announce our debut album, “Underage Thinking”. It will be released within the coming months, so keep your ears peeled for that! Once it’s out, you’ll be able to download it directly from our Bandcamp, or purchase it from iTunes, Google Play, Amazon Music, etc.

We’d like to thank Webber from Cremains for taking on the role of Engineer/Producer/Pizza Orderer for this album. We couldn’t be doing this without you. We’d also like to thank all the nice folks over at Tired And Pissed Records for helping us distribute the album across the vast internet.

We’ll also be releasing two singles before the album’s release. You’ll be able to hear them various places, with more information about the album coming when they drop. Be sure to follow us on Facebook, Instagram, and pretty much everywhere else, in order to stay up to date! 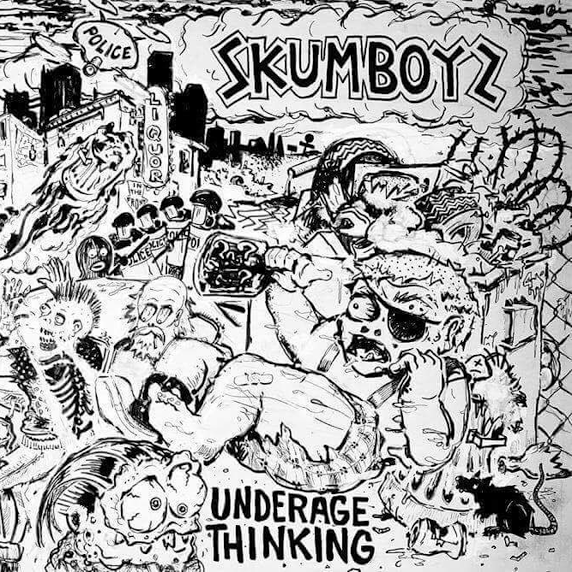 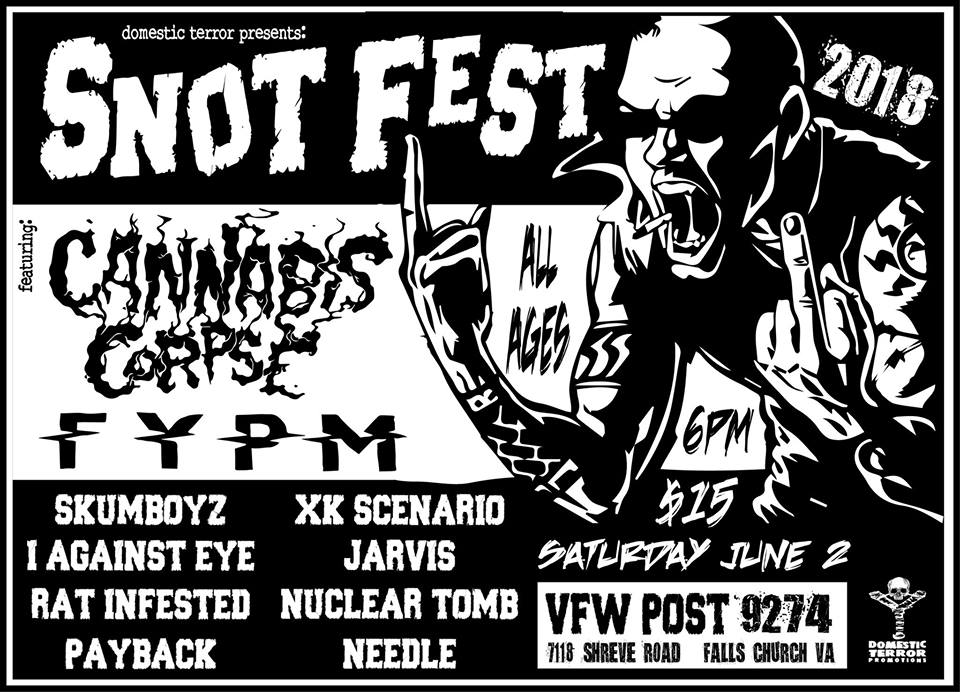 The end times are upon us, Skumfux. It is time for Snot Fest Numb3r Thr33, set for June 2nd at the VFW in Falls Church. We’ll be playing alongside Cannabis Corpse, Fuck You Pay Me, I Against Eye, Rat Infested, Payback, XK Scenario, Jarvis, Nuclear Tomb, and Needle. There’s gonna be a kick ass pre-show the day before at the Pinch, and an after-party show goin down at the same place. You DO NOT want to miss this legendary fest.

We’ve put together a little video clip for our song “Vile Troop”, which we released as part of Domestic Terror Volume 1. Show clips were filmed by Harrison Hedge (of Cult XLV), Chris Verduga, and HxC Fotography. Additional clips are public domain, and the various artwork is also public domain or created by a bandmember.

We also submited this video to NPR’s Tiny Desk contest (because we made it at a desk). 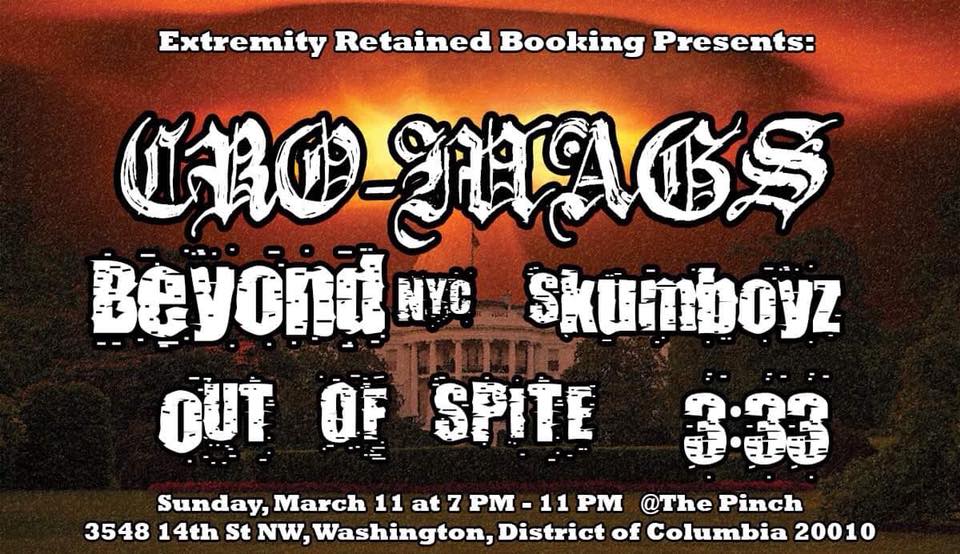 On March 11th we will be opening up for the Cro Mags and Beyond along with 3:33 and Out Of Spite at the Pinch in Washington, DC. We’re hella psyched, and it’s looking to be a big show.

Get your tickets for it here! Show starts at 7pm.

Domestic Terror Volume One is out now! Our exclusive contribution, Vile Troop, appears as the 2nd track on the A-side. You can buy the vinyl from any of the bands that appear on the comp, or at a number of record stores around Washington, DC and Richmond, VA. All purchases come with a free digital download!

Along with PayPal, Cash, Food, and sonnets composed by weary travelers, Skumboyz is now officially accepting the Bitcoin and Ether cryptocurrencies as payment for shows, merch, and music. Or you can just send us free money. That’s cool too. Send us a message at shop@skumboyz.com in order to set up the orders and spend anonymously.

Deprecated: Directive 'allow_url_include' is deprecated in Unknown on line 0